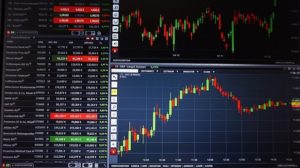 Following are some basic terms that are used in forex trading.

Made up for a Base currency and a quote currency (or Counter currency), it’s the way of displaying and pricing one currency against another to be used to make a trade.
Example : EUR/USD

The second currency in a currency pair. Also known as the Counter currency.

The BID represents the price at which the forex broker is willing to buy the base currency in exchange for the counter currency.

The ASK price is the price at which the forex broker is willing to sell the base currency in exchange for the counter currency.

The difference between the Bid and Ask price. The spread is how “no commission” brokers make their money. Instead of charging a separate fee for making a trade, the cost is built into the buy and sell price of the currency pair you want to trade.

Leverage is defined as the ratio of the amount of capital used in a transaction to the required margin. In other words, leverage allows you to control much larger amounts in a trade, with a minimal deposit in your account. You can open up a small account with a brokerage, and then essentially borrow money from the broker to open a large position. This allows traders to magnify the amount of profits earned.

The most common increment of currencies is known as the “pip.” It is the smallest value change in a currency pair exchange rate. Example, if the EUR/USD moves from 1.1234 to 1.1235, that is ONE pip. A pip is the last decimal place of a quotation. A positive or negative pip value is how you measure your profit or loss.

When a currency pair is long, the first currency is bought while the second currency is sold short. To go long on a currency means that you buy it, hoping that the price will rise. A long position is expressed in terms of the base currency.

Equity in Forex trading is simply the total value of a Forex trader’s account. When a Forex trader has those active positions in the market (during open trades), the equity on the Forex account is the sum of the margin put up for the trade from the forex account, in addition to any unused account balance. When there are no active trade positions, the equity is known as ‘free margin’, and is the same as the account balance.

The deposit required to open or maintain a position. Margin can be either “free” or “used”. Used margin is that amount which is being used to maintain an open position, whereas free margin is the amount available to open new positions.

Swap is an interest fee that is either paid or charged to you at the end of each trading day. When trading on margin, you receive interest on your long positions, while paying interest on short positions. The net interest difference is known as the carry and traders seeking to profit from this are known as carry traders.

Positive carry results when you receive more in interest than you are required to pay, and is added directly to your account. If the carry is negative, it is subtracted from your account. If you open and close a trade within the same day, the trade has no interest implications.

7 Money conversations to have after getting engaged

What is Emergency fund? Need and Where to invest it?

What Is Public Provident Fund?

Different Components of Money in India