In mathematics and statistics, covariance is a measure of the relationship between random variables. This metric used to measure how one random variable moves in relation to another random variable. In finance, the covariance of returns measures how the rate of return on one asset/stock varies in relation to the rate of return on other assets or a portfolio. However, the metric does not assess the dependency between variables. Unlike the correlation coefficient, covariance is measured in units. The units are computed by multiplying the units of the two variables. It can take any value between -infinity to +infinity, where the negative value represents the negative relationship whereas a positive value represents the positive relationship. The values are interpreted as follows: 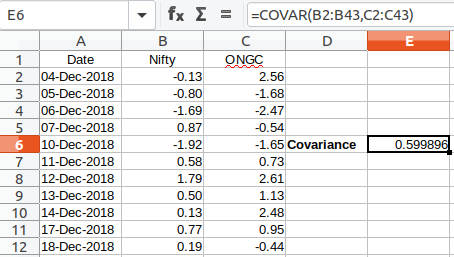 Covariance can be calculated easily in any spreadsheets such as LibreOffice Calc or Microsoft Excel.

In the illustrated example, the formula used is =COVAR(B2:B43,C2:C43) and the calculated value of Covariance is 0.59986. Which implies for the past two months the rate of return of Nifty and ONGC moves in the same direction. In other words, they rise or decline simultaneously.

If you have any queries leave the same in the comment section below.

Balancing Marriage and Taking Care of Your Parents

What Is Public Provident Fund?